One of the most frustrating features of being an evidence based rationalist is all that damn evidence.  It would be so easy to simply “pick” a position because when asked you merely have to point to a dusty book or towards the sky and say: “Cuz its true”  Can you imagine the ease with which you could navigate through life, the comfort of the weight of the world cast to the shoulders of some omnipotent curmudgeon, and of course the simplicity of human interaction when your point of view is the only one that matters?

I can only imagine the clear simplicity, the deep echoes of empty mental hallways, and the quiet peacefulness of a sign on the wall that simply says “When in doubt, GOD”.  I don’t always romanticize ignorance but when I do its usually at 3:24 in the morning and I have to work at 7.  The noise is inescapable, the data insurmountable, and the arguments are eternal when I simply wish to drift off to restless dreams.

Cue Ed Buckner’s book “In Freedom We Trust: An Atheist Guide to Religious Liberty”.  Okay, first off that sounds like a dig on this book, suggesting that it is a narcolepsy inducing snooze fest but alas it was exactly the opposite.  This book is a toolbox, one in which a reader could put all the arguments, the thoughts, and the questions in their respective drawers for safe keeping.  Using the wonderfully compiled set of resources in the “Selected Bibliography” I could read for months and never learn the same thing twice.

Adopting the terminology of our secular movement found in the “Glossary”, which gives clear and concise definitions, the reader can quickly understand and participate in the Lingua Franca at any major convention or meeting. Lastly, of course, is the “Notes” section that gives sources to all the references in the text so the reader can buffer any understanding they may already have with even more evidence.  Seriously, this book is one to read sprawled on a couch to soak it in, feeling what it is to be a rational and secular part of the atheist community, and then the second reading should be done at a computer desk with an internet connection and lots of room for notes.

While I was reading it quickly became clear why such a short amount of time was spent on very specific topics from the basic fundamentals of a secular nation, the axioms of such argumentation for the separation of church and state, the utter confusion that is conservative political party logic and the human shaped creature that is Newt Gingrich, the actual historical roots of this secular and “Unchristian” nation, the trivial battles over the ten commandments in the public square and in schools, the clarification that secularism is for all religion not specifically against the Christians, the lies and claims repeated ad nauseum on morality in our society, free speech, religious freedom, and religious law all meet the constitution head on, and finally the questions on all our minds regarding the pledge of allegiance or argumentative hyperbole battled daily by the godless in response to the faithful.

This book was meant to be a shotgun for broad spectrum protection not a sniper rifle for singling out very specific arguments.  I have reserved “In Freedom We Trust” a place on my bookshelf right next to The Skeptics Annotated Bible as it is a resource that can be used in almost ANY argument you will find yourself in.  Advanced logical apologetics aside, Ed and his son have created a mecca of clear and concise responses to arguments such as: “The founding fathers created a Christian nation based on the Christian God” by repeatedly using the openly published and legitimate words of Jefferson, Madison, Washington, Franklin, and Adams.  The question of the church receiving financial support from government funds was effectively destroyed by quoting Benjamin Franklin on page 73:

and by quoting James Madison on page 35 with an allusion to this quote again on pages 74-75:

Furthermore there are explanations as to the “Unchristian” roots of the declaration of independence and the fourth of July in that “The New Testament upholds the view that government is an intitution of God, not of the people. Romans 13: 1-2”

This is quite tough to rectify within a country exhibiting a government “deriving their just powers from the consent of the governed” which are the exact words of the declaration of independence seen below.  The Declaration of Independence is routinely noted by religious arguments as the only document from the founding of our country to mention a “creator” yet here is a glaring contradiction to the bible that few would be able to talk their way out of.  How would YOU resolve the quote above with the one below?

Furthermore this is a chillingly clear example of how people in positions of power could interpret the ruling class as having been sanctioned by god using the Divine Right of Kings… The very reason the founding fathers looked with disdain upon England and the ill conceived taxation without representation.

Moving from my gluttony of high praise there is only one fault that I could find in this text and that is of the breadth of topics, there is simply so much here that someone looking for a complete and lengthy analysis of the complete worldviews of each founding father, apologetics for biblical interpretation, or biblical historicity would have to look to volumes by authors like Richard Carrier, Robert M. Price, Bart D. Erhman, John W. Loftus and many more who have written books dedicated to those topics only.  But, when considering the topic of freedom and secularism the basics and some specifics are promoted here with more additional reading than you could complete in a year of pure summer vacation.

This is just the beginning of the wealth of knowledge captured here and ready for consumption.  It is frighteningly clear how little I know when reading a book put together this well, I tip my hat to Ed Buckner and his son Michael at creating a masterpiece of research and experience.  And finally, I quietly assume that they both take comfort in the knowledge that this book will be used for a very long time as a stone in the foundation of the secular movement in this year of our creation 13.798 billion.

Ed Buckner will be our guest on the 13th don’t forget to watch the show Sunday at 11! 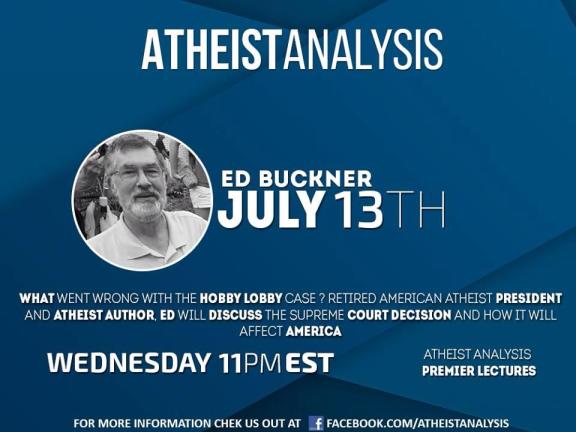 2 Replies to ““In Freedom We Trust: An Atheist Guide to Religious Liberty” Review and Ruminations”