“Give me a dozen healthy infants, well-formed, and my own specified world to bring them up in and I’ll guarantee to take any one at random and train him to become any type of specialist I might select.”

It would seem to be incumbent on behaviorists to not only employ an active reach into the traumas and stresses of those they are beholden to (the communities of their service) but also to actively offer what tools and powers available to protect the people from becoming victims in the same sense. For this reason I feel the necessity to, in the fair brevity of this blog format, offer what small gems of wisdom I can from my studies into Applied Behavioral Sciences.

Firstly it is important to identify the problem at hand, in this case the active shaping of the personality and thinking of others, dubbed brainwashing or thought reform, this concept may once have been seen more science fiction than actual science, but has gained considerable credibility since the Korean War wherein American POW’s reported attempts to reshape their personality and thinking by Chinese and North Korean captors.

Interestingly there are numerous approaches to this; Persuasion, Compliance, and Education (also called Propaganda). Comprehensively the important factors of all of these methods are control, while each seeks this end by different means the result is more-or-less the same and requires a degree of isolation to accomplish. Controlling the stimulus of the victim’s environment (generally to isolation) as well as the sleep patterns and diet are hugely important to this process; potentially involving deprivation of proteins or certain nutrients for extended periods of time to dull thinking.

Expert psychologist Robert Jay Lifton added his specific study to the mix working from the angle of a ten-step foundational approach used on prisoners of war namely;

Which when followed could result in operational behavioral control. Understand that once you control someone’s behavior their mind will, over time, shape to incorporate the behavioral adjustment, as if to justify it. This, given a long enough time period, gives the brainwasher the ability to control the victim’s thoughts through reinforcement of behavior which finally will begin to influence emotion. Once you get a person to act a desired way, justify their behavior the desired way, and have them feel a desired way about it, you have them.

Thoughts and emotions can be influenced on this scale by controlling the information received while building cognitive dissonance, which by the standard of the human mind can operate to change the overall behavior of the individual. This is because brain wants to be in harmony with itself. Consider an organization that forces certain isolations within itself from society as a whole. Perhaps said organization disallows children from playing with certain popular toys (justified or not), this disallowance of a certain behavior will serve a dual function in the act of brainwashing the subject; firstly it will serve to get the individual to believe that playing with the toy is bad, and second it will distance the person from all individuals who play with said toy. By simultaneously isolating the person and gaining control of their behavior you can from control the information taken in. 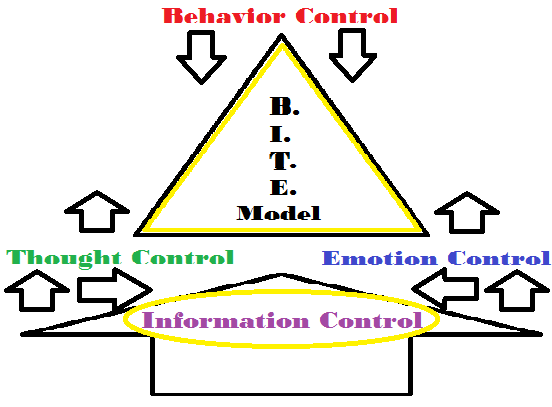 (A representation of Hassan’s BITE Model )

The backbone of this system is foundationally within the bounds of thought-control by the redefinition of some terms as one thing to another. Here is an example;

X-Organization frequently refers to its own teachings and ideals as “the truth”. This titling is constantly reinforced by repetition such as “I am so glad you finally came to know the truth” or “it is our duty to spread the truth throughout the world.” In this way if the member ever thinks “X-Organization might not be true,” they may in effect become confused because of this redefinition which also has redefined their thinking into “the truth might not be true”. Of course their mind herein cannot comprehend this idea (as it is logical nonsense) thus the mind may excuse the thought as false outright. Moreover if the individual has positive intentions he will not be able to conceive of how spreading the teachings of X-Organization could possibly be a bad thing, after all that is nothing more than spreading the truth. This in effect controls the thoughts and emotions of the subject enabling total domination of their behavior.

In Brainwashing: The Science of Thought Control Oxford University neuroscientist Kathleen Taylor postulates that an understanding of the brain is a requirement for effective brainwashing and in a plug for her book stated that the best approaches “do not leave the brain out of brainwashing.” (Taylor 2006). Thus the most effective approaches to this likely enact these provisions aware of their impact rather than by coincidence, as a purposeful attempt to manipulate the thought, emotions, and actions of their victim.

In the end one thing seems to be clear and that is people can in-fact be systematically broken down and manipulated, especially if they are ignorant that it might be happening. Awareness is the first step to self-protection, but the most important step is self-empowerment of critical thinking skills. No human is immune to a degree of confirmation bias thus all ideas must be seen as suspect until verified by outside means through more than one source.

One Reply to “Brainwashing and the Involuntary Suspension of Critical Thinking”