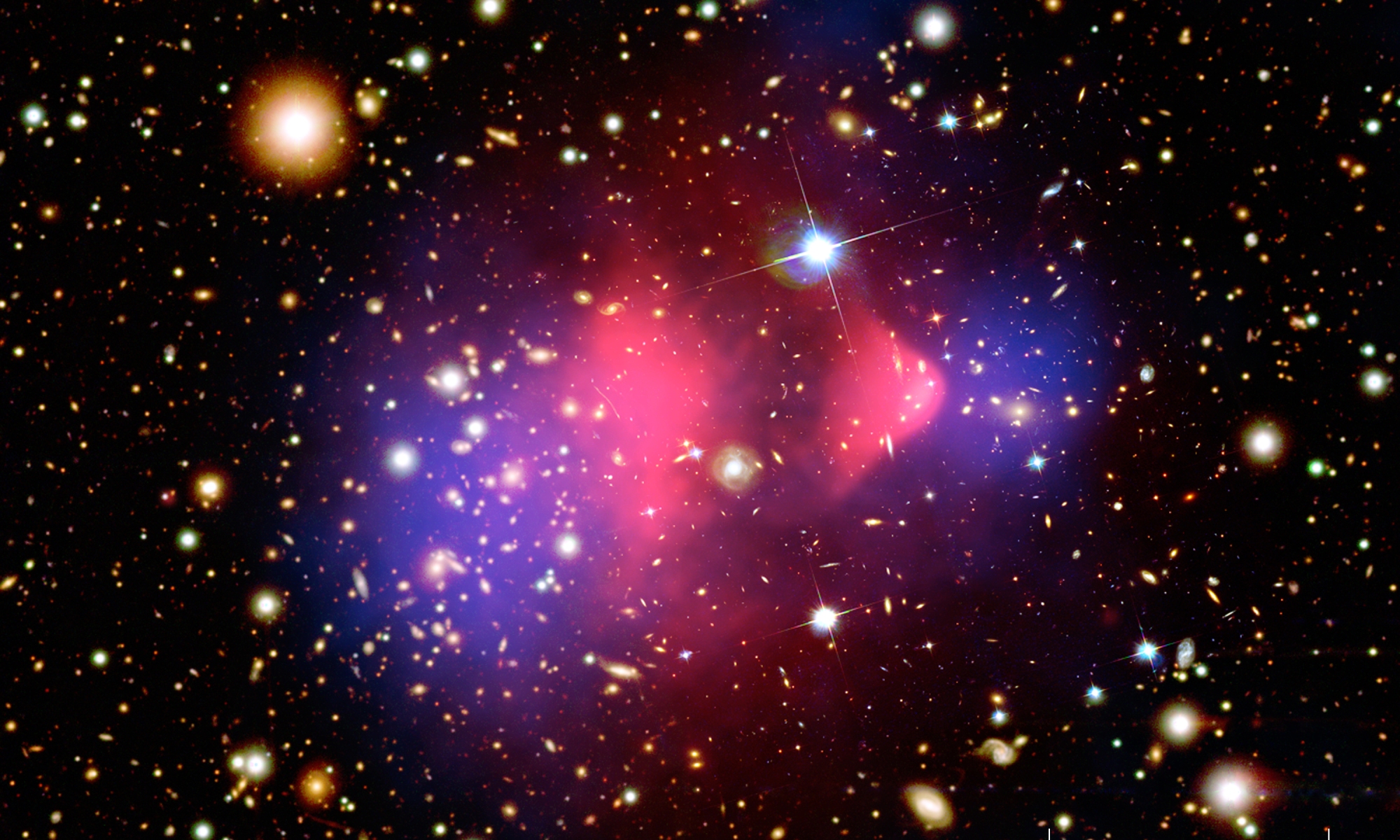 The question “What is the universe made of?” is one of the most fundamental questions one could ask about reality, yet the lack of answers leads to one of the biggest problems in modern astrophysics and cosmology. It would first appear that the observable universe is chiefly composed of matter and energy, right? Well, that’s actually not true at all. Everything we can see, the Earth, the Sun, the Moon, every star and every galaxy in the sky, every atom and every photon of energy, constitute roughly five percent of the entirety of the universe. What about the rest? What else is there? Roughly twenty-seven percent is dark matter, and a whopping sixty-eight percent is dark energy. Not a single human on this planet knows what dark matter and dark energy are, unless of course they haven’t told anyone. All we can do at the moment is measure the effects of what we call dark matter and dark energy on the physical universe, and apply these labels to the unknown.

Before we get into the history and details of dark matter, know that the term “dark matter” is a misnomer. We don’t know if what’s causing the observed effects that we call dark matter is actually made of matter (although popular hypotheses suggest that it could be baryonic matter or weakly interacting massive particles), we have no clue what it is. There are observations that we can’t explain, and we call them dark matter. That’s it. We’ll come back to this and go into more detail in just a bit.

In the early 1930s, an astronomer at Caltech by the name of Fritz Zwicky was studying the movement of about a thousand galaxies in the Coma Cluster. Zwicky used an eighteen inch telescope and measured the velocity of the galaxies. He then used the viral theorem to measure the mass of the galaxies. The viral theorem is a simple use of classical mechanics that relates the velocity of orbiting objects to the gravitational force involved. Since Isaac Newton told us in his gravitational theory that the gravitational force acting between several bodies is proportional to the mass of the bodies, Zwicky was able to calculate the total mass of the Coma Cluster. Zwicky then measured the light output of the galaxy cluster and compared it to a nearby stellar system and found that the output of light per unit mass of the Coma Cluster fell short, by a factor larger than one hundred, of a single star in the nearby cluster of stars. He then inferred that there must be much more matter in the Coma Cluster that could not be accounted for by star light, and he dubbed it “dark matter”. This was the first observation and the initial evidence of dark matter.

The effects of dark matter can also be seen in any many galaxies. Take, for example, our galaxy the Milky Way. Gravitational theory predicts that the stars toward the center should be moving faster than those that are farther from the center. However, when astronomers measured the velocity of stars all across the galaxy, they found that they are all moving at roughly the same speed. With the observed mass in the galaxy and their observed velocity, all of the stars should fly apart; there just isn’t enough visible mass for gravity to hold everything in the galaxy together. So, astronomers reasoned, there must be unseen matter that is tugging and slowing the stars, and holding all of the stars in the galaxy together by their collective gravity and the gravity of the invisible “dark” matter. Dark matter is still very much a problem in physics and cosmology, and has been since Fritz Zwicky made the first observations. It is still unknown what makes up that illusory twenty-seven percent of the universe.

The other sixty-eight percent is labeled “dark energy”, and is perhaps even more mysterious and perplexing than dark matter. In the early twentieth century, Einstein had developed his theory of general relativity, a theory of gravity dealing with the large and massive. Not long thereafter, Edwin Hubble, by measuring the redshift of distant galaxies, discovered that the universe is expanding. It wasn’t until much later, almost a century, that this expansion was discovered to be accelerating. What’s causing this acceleration? No one knows. Our best explanation is that some property of space, something repulsive (unlike dark matter) is causing space to fly away from itself at an accelerating rate. Dark energy is the current name for the unknown explanation of why the expansion of the universe is accelerating. Dark energy is also a misnomer, because it may not even be any kind of energy that is causing the acceleration. That is, however, what seems to make the most sense at this point, that the vacuum of space has some kind of repulsive energy.

Explanations for the observations that have been dubbed “dark energy” are not incredibly numerous. One possible explanation is derived from quantum theory, which predicts that “virtual particles” pop into and out of existence so quickly that they cannot be measured, leaving only a minute bit of energy behind. This would give the vacuum of space an energy, but this energy is not at the right value to account for the acceleration of the expansion of the universe. Another explanation is that space may contain some new undiscovered kind of energy field, but no evidence has been found for any new type of energy in space. Lastly, Einstein’s general theory of relativity may be incorrect. This would not only account for the problem of dark energy, but it would also affect normal matter and could account for dark matter as well. However, we would have to know what is wrong with Einstein’s theory, and develop a new theory of gravity. Even then, there is no guarantee that these problems would be solved.

Dark matter and dark energy are some of the biggest, most mysterious, and most perplexing problems in modern astrophysics and cosmology. The answers to the problems may be within our lifetime, just beyond them, or perhaps they will never be solved. The question “What is the universe made of?” has been asked for most of mankind’s history, but even in this age of science and technology, there is no answer. The universe is just too wondrous to give up its secrets yet. But that is the beauty of science, and the poetry of reality. I strive to answer questions like this, and intend to spend my life pursuing them. It’s another reason I love science, knowing there are always problems to be solved and questions to be answered.

So as always, until next time, go forth and learn!