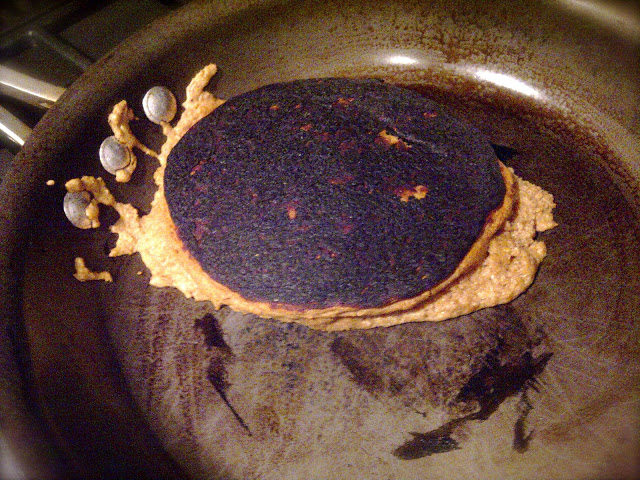 Earlier this morning, occupied as I was by two projects of interest simultaneously (making my breakfast and writing this essay), I managed to burn my first attempt at the former on account of turning my attention full-bore to the latter. The result furnished me with an object lesson (as if I needed it) in the way things work in the natural world. If one were to inquire into the reasons why my first pancake went into the trash, thoroughly blackened on one side and filling my house with acrid smoke, two equally viable and meaningful answers would present themselves, one having to do with the nature of chemical changes and the other with human psychology.

The first of those answers simply has to do with molecular bonding, with the propensity of oxygen to bond with many other chemical elements in its never-ending pursuit of a lower energy state – which is something that everything in the universe seeks continually, and which drives everything from the fusion reactions in the cores of stars to the chemistry of life. The second answer has to do with our prioritizing of tasks – which is one of many things that we have in common with every other animal. It might be more difficult to distract a cheetah from its fixation on a gazelle than it is to distract a human from making his breakfast, but it most certainly can be done. Our priorities – the priorities of all animals, in fact – are flexible. This is one of the realities that lies behind the notion of “free will” – the appearance of which, pretty much everyone agrees, is far more pronounced in humans than in other animals. (The line of demarcation is not by any means so clearly drawn, however, as creationists imagine. And the very notion of “free will” is a fallacy anyway, as research in neuroscience may have demonstrated.)

In no case did a genii or devil or angel or any other supernatural being have anything to do with the scorching of my first pancake. But if the event had happened 3,500 years ago to a biblical patriarch, the account might read something like this: “And thus it came to pass that Satan distracted the LORD’s chef David with devilish thoughts of evolution, and he didst ruin that sacrifice with which he had wrought to please the Most High God; and the smoke of that sacrifice pleased not the LORD our God, t’was instead regarded as an unholy stench in his omnipotent nostrils, and that sacrifice was unceremoniously spilled in the trash and carted to Gehenna, where the worm dieth not and the fire is not quenched.” Our Bronze-Age forebears had relatively little insight into human psychology.

Speaking of human psychology: one of the reasons, I suspect, that creationists are so ironclad in their resistance to evidence of evolution is that Genesis 1 makes us “special.” According to that first biblical creation story, man (a word I use here to mean exactly what it does in Genesis 1: Homo sapiens, both male and female) is the crowning glory of creation, “made in the image of God.” If that isn’t special, I don’t know what is. It’s certainly an ego-feeding notion and it’s easy enough to understand why so many people are reluctant to let it go. 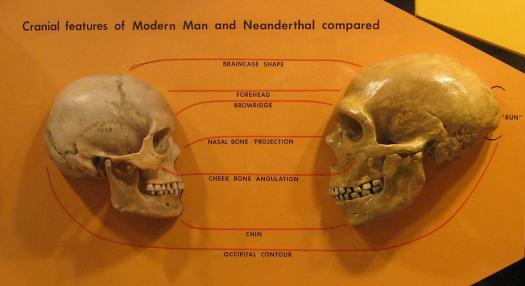 But let’s look for a moment at what’s implied by that Latin binomial Homo sapiens – a designator that’s been in common use for the past two centuries (but which is of course found nowhere in the Bible). The second word distinguishes us (as “wise”) from the now-extinct members of the genus named in the first, of which there have been plenty: reading roughly from more recent to more distant past, Homo neanderthalensis, Homo heidelbergensis, Homo erectus, Homo habilis . . . . In the case of H. neanderthalensis, we’re probably looking at a (kissin’) cousin; in the case of the others, at ancestors. At what point did these critters qualify for the vaulted position, “made in the image of God?” I would argue that if the phrase “made in the image of God” has any meaning whatsoever, it extends to all animals (and yes, I do include mollusks, arthropods, echinoderms, annelids and all the rest).

Is there more to a human being than there is to a honeybee? Of course there is. Honeybees are exactly as “evolved” as we are – exactly as “modern.” But there’s an enormous difference in brainpower between us and the arthropods – in fact, between all mammals (and probably all chordates) and all arthropods. But are we more “important” than honeybees? That depends on what you’re looking at. Without honeybees, many flowering plants would go unpollinated and would therefore cease to reproduce – would, in other words, go extinct. Is anything in the natural world nearly so dependent on us for its continued existence as flowering plants are dependent on honeybees? I believe the answer is clear.

Jesus opined that we are of more “worth” than many sparrows. Of course, looking at the matter from his perspective – that of a 1st-century Palestinian who had never been more than 15 miles from home – that’s an obvious enough conclusion to draw. Moreover, it’s a perfectly reasonable and respectable conclusion for a 21st-century humanist to draw on a case-by-case basis: obviously, if any one of us were to be confronted with the choice between a sparrow’s death and that of our own child, we’d sacrifice the sparrow without a second thought. And if anyone were to hesitate in that discriminative judgment, we would surely chalk that up to some kind of mental unhingement: big-brained animals take care of their young. It’s a purely Darwinian thing: it didn’t take Jesus of Nazareth to teach us that – we’ve “known it” at least ever since the dawn of the amniotic age.

I get a little impatient with creationists who make the claim that “evolutionists” recognize no difference between ourselves and any other animals: that’s so obviously a straw man that I find it hard to believe that creationists are satisfied with it. And I find it equally infuriating to see those same creationists relegate the entire natural world to mere utilitarian status, as though “God” had given it to us to do with as we please. That way lies madness, as we see in our own time – as the Sixth Great Extinction unfolds around us, driven by us. That way lies the Anthropocene.

One of the straw-man claims that creationists make about the scientifically-minded community is that we “evolutionists” believe that evolution = “improvement.” I heard this regularly during the period of my childhood indoctrination: “Evolutionists claim that everything just keeps getting better and better – so why do we see mankind becoming worse and worse?” But that’s not what evolution “teaches.” Human beings do not represent an “improvement” over chimpanzees: they represent a change in the use of a vertebrate body plan (from four hands to two hands/two feet and from “knuckle-dragging” to upright) and an increase in brain size. Does that make us “better?” (Please don’t imagine that I’ve suggested that humans evolved from chimpanzees. We didn’t.) Consider:

The principle that drives evolution is Natural Selection, working on genetic diversity. This is illustrated easily enough in the contest between a specific cheetah and a specific gazelle – note that the two species are not in a competition of any kind: they co-evolved in a predator/prey relationship, which is a kind of symbiosis. The two populations keep each other’s numbers in check. Any contest comes down only to individuals, and those that are best suited to the contest are more likely to live long enough to produce offspring, to which they will bequeath the genetic characteristics that bestowed that advantage on them. In any particular contest between a cheetah and a gazelle, it’s winner take all: one of them will win and one of them will lose. It’s a life-or-death matter for both.

The effect of that ongoing contest between individuals is called Natural Selection: the fittest within each of those populations will tend to win the contest. The effect this has on the species is: within the limits imposed by the nature of gravity, air resistance, muscle mass, etc. – in other words, by physics – both cheetahs and gazelles will tend to get faster over time: those who lose the contest will cease to be contributing members of their gene pool. But this can by no means be read as “improvement” except by those who make their money at the dog track: two species whose predator/prey relationship keeps them both healthy and in balance with their environment need no “improvement” whatsoever. The “arms race” that has been described by evolutionary biologists is in no meaningful sense an “improvement:” it simply drives the way ecological communities develop over time. 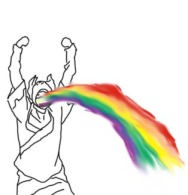 If the foregoing treatise seems to have meandered away from its own thesis (as vaguely defined, if at all), consider it a kind of bolero.