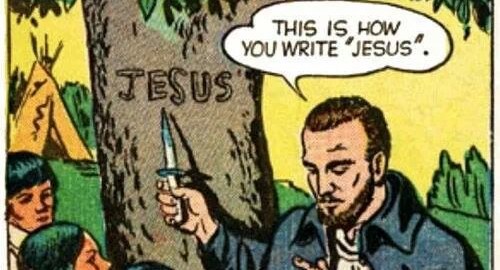 You could declare God loves me with one hundred percent commitment. You might make it a personal mission to spread his joy, one that has spanned a lifetime. Yet as a fellow human, you will never be enough to convince me. You are just another person. One that has only experienced life and nothing more.

See it from my perspective. Your appearance doesn’t really stand out compared to the rest of us. You certainly rely on food and water daily to survive like the rest of us and you require sufficient sleep to make it through the next calendar day like we all do. So when you apologise for that cough that has troubled you all week whilst preaching in a distinguishable local dialect, is it any wonder why I feel I’m not in the presence of anyone of superiority or advanced communicative capabilities with a deity?

I see salesmen and women daily with an aim to sell a product or idea. I listen to people of all faiths try to persuade me into conversion. If you are a just another person, I am not going to be satisfied with any attempt to save my soul. Convince me to buy some tea perhaps, but not about an existence in an eternal afterlife.

‘Remember, Christ loves and died for you!’

Why do you tell me this? Don’t you understand that the value of the statement decreases rapidly each and every time the message is passed down to another messenger? A messenger that walks down my street like any other? Pays taxes? Works for a living? For someone that knows the secrets of the universe you seem very, well, normal.

So you tell me you have in fact received messages from God. Well done on that. Anyone with a shred of common sense would understand that in a world full of deceit, word of mouth can indeed be deceptive. It is unfair for me to accept this as truth to prevent causing any offence, as I am more than likely being misled. Why should I stop at Christianity, should I let every faith convince me of this phenomenon too? God surely understands this, or at least understands my unwillingness to listen to a person I have never previously met lecturing me at my front door or via a message online. If these are the best communication methods possible, I have been incorrectly led to believe God is more competent than is true.

The audacity to state God is omnipotent via word of mouth leaves me in a state of disbelief. An instant discredit to the statement. If a person approached you claiming that chimpanzees are in fact the most intelligent animals on earth, you would immediately question why a chimpanzee hasn’t exercised that intelligence itself and told you.

The very fact you have to tell me about your religion is demonstrative of why that religion isn’t as special as you think.

The beauty of becoming an atheist is the theist argument appears more and more transparent. I now see any attempt to convert me as a rather humerous reminder that humans both create and spread the biblical stories. The strings become as visable as the puppet. The puppeteer? Just another person. One that benefits from your reliance on a false deity. Sadly, the puppeteer will never be seen by the believer whilst prayer consists of eyes closed and heads down.

One Reply to “If You Have to Tell Me About God, Don’t Bother!”