Over the past year, Atheist Analysis has had the pleasure of getting to know a fine young gentleman named Joey Kirkman.  His book Bedtime Bible Stories was a great inspiration for our organization as we looked for tools to provide those in the atheist movement resources to help combat religion.  Joey, who has in recent years identified as an anti-theist, and even skeptic, has taken on another label in hopes of trying on a new religion.  He has recently converted to and become a Pastafarian.  That is right you heard it here, Joey Lee Kirkman has given up being an anti theist and joined the ranks of Pastafarians everywhere. 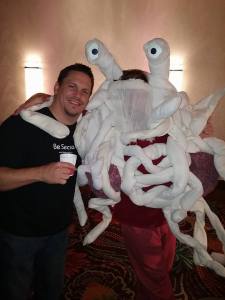 Many of you may wonder, what is a Pastafarian and what church do they belong to?  According to Joey, Pastafarians are associated with The Church of the Flying Spaghetti Monster.  Many of you have probably heard the phrase “rAmen” or “praise his noodly appendage” before, but now they are associated with this new religion.  The website claims they have been officially around since 2005, but have existed for many years out of sight.  On first look, we see that they claim to be a legitimate religion and that they feel they deserve the same respect that Christianity does.  They have a sacred text, a “god”, and a belief system structured around what they feel was given to them from the prophet Bobby Henderson.  The one thing that struck me as odd is their only tenant that they require for everyone to follow.

“By design, the only dogma allowed in the Church of the Flying Spaghetti Monster is the rejection of dogma. That is, there are no strict rules and regulations, there are no rote rituals and prayers and other nonsense. Every member has a say in what this church is and what it becomes.”

They then go on to provide a few general comments about their beliefs.