If you’ve spent any time on YouTube or Facebook, you’ve probably seen some pretty awful videos of responses from families when individual members “come out”. Very recently, there was a sad story about a transgender girl who killed herself after years of religious-based “therapy” and her parents’ denial of permission to start conversion therapy.  Often, atheists and agnostics coming out as non-believers and skeptics to their families isn’t as spectacular, but if you browse this blog, you can easily find deconversion stories in which the religious segment of the family cuts off, denies, or shuns individuals who no longer believe as the family feels they should.

Now there is a place for these hurting individuals to turn, especially the most vulnerable among us. Secular Avenue (SAFE) is a 501(c)3 licensed charity helping those in need of a safe place and help, whether in need because of a violent relationship, coming out lgbt, or being kicked out for religious reasons. They offer counseling service, financial and legal assistance, and can assist individuals in need with finding the resources to help them get safe. If you or someone you know is in need, or in danger, visit them or share the information.
END_OF_DOCUMENT_TOKEN_TO_BE_REPLACED

Just keep smiling and one day life will get tired of upsetting you.
~Unknown

To be an optimist is to have a positive outlook and approach towards life.

Optimism is a choice.  Every morning when you get out of bed, you choose to be in positive mood or not.

It may take some work, but you can build your level of optimism.  It’s really just a matter of recognizing your negative habits and training yourself to look on the bright side.

It’s extremely liberating and empowering when you realize you have control over what you’re telling yourself.  And that most of your suffering is self-imposed.  A feeling of peace comes over you when you say no to negativity and learn to stay positive.

When you’re a pessimist you not only waste time ruminating on how bad things are going to go, but you actively stop yourself from trying to better your situation.  Negativity breeds inaction and pessimism breeds indecision.

If that’s not enough….

A few benefits of being optimistic:

There will always be times in which things don’t work out quite how you anticipated. There are going to be times when you’re feeling down.  Just don’t make it your default way of thinking.  The perceived protection of holding onto negativity is more like a prison.
END_OF_DOCUMENT_TOKEN_TO_BE_REPLACED

We sometimes forget that we’re only here for a short time. That all we have is now and that tomorrow is not guaranteed. That our uses of attention and the path we take influence the stories others will tell about us when we’re gone. They determine what kind of memory we will be for people.

I write this with a heavy heart as yet another non-combatant has been murdered by terrorists. His name was Peter Kassig. 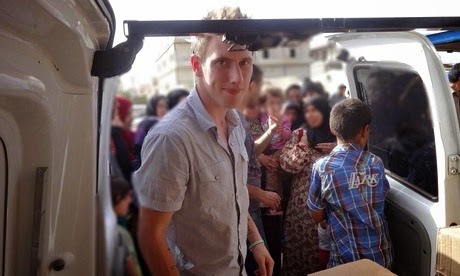 Peter was an American aid worker from Indiana. The 26 year old Iraq war veteran was kidnapped in 2013 while delivering relief supplies to refugees on the Syrian border. [1]

Peter was destined for great things.  He dedicated his life to helping victims of war.  He found his passion helping those in need and was committed to solving the problems he saw in the world.  He even started his own non-profit.

He put himself in harms way to pursue the well-being and happiness of people that he’d never met before and didn’t need to care about.  He was moved by love and compassion to make a difference; to create a better world.

He was a devoted humanitarian and died wanting others to flourish.  He leaves behind a lasting purpose and significance.  His story will always be told in a positive way, and his accomplishments are truly lasting.

If there was ever someone that modeled the golden rule, it was Peter Kassig.